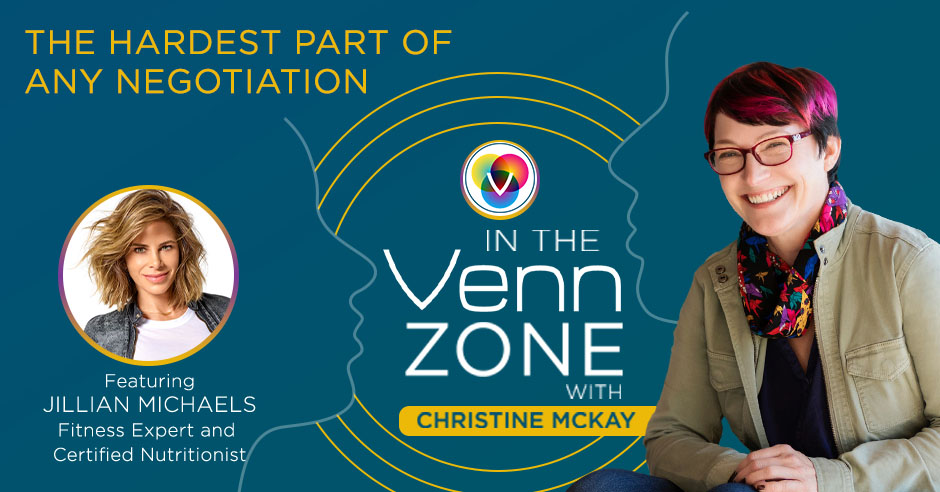 Our preconceived notions can be the undoing of a long-term relationship. Often, people go into a negotiation and make decisions based on short-term outcomes, not thinking about the long-term implications. As a result, they end up losing in the negotiation over time, even if they feel like they won at the moment. In this episode, Christine McKay has a one-on-one talk with Jillian Michaels, a renowned fitness expert and a certified nutritionist, about how to go around a situation that involves making decisions that would bring a win-win situation to any negotiation. As a fitness trainer, Jillian deals with people’s mindsets all the time and constantly encouraging and pushing them out of their comfort zones. She explains how her training as a fitness instructor moved her forward in her negotiations and finding solutions that work for everybody. She also talks about the win-win situation mindset and how she overcomes the challenges of managing her own business and negotiations.

Listen to the podcast here:

Winning In Any Negotiation With Jillian Michaels

I am so excited to have Jillian Michaels here with me. She is a renowned fitness expert and a certified nutritionist. I am honored to meet you. Thank you for being here with me.

Thanks for having me.

I have to be honest, I didn’t know a lot about you until I saw you on JT Show. One of the things I was struck by was how warm you were when you were on the show with JT. I suspect because I did some homework and that’s not probably something you get very often. I’m curious because I’ve been a negotiator for many years. I’ve negotiated with a lot of large companies. People’s perceptions come and they bleed into negotiation. You had public breakups with networks and personal life. I saw one hideous thing that some jerk posted about your smile being insincere. I was like, “These things come into play when people research on you.” How does this public perception of view impacted some of your negotiations as you’ve built your business with your partner? It’s something that people will be interested in.

Not many, but there are few individuals that thought they were going to come in and show me who was boss and it did not go well. There was a guy who came into NBC, and as a woman, when you have strong opinions, you’re difficult. It’s, “She’s a bitch. She’s difficult.” I must hear that all the time. I thought to myself like I was the consummate professional. I did my job better than anybody could have done their job. I never abused any of the crew members or anybody, but if I didn’t like something and thought it was a bad idea for my contestants, for me, for the show, I would let you know it. I was like, “This is a terrible idea. This is non-intelligent. It doesn’t make sense that you were difficult, and you are a bitch.”

I had this whole, “She’s such a bitch. She’s difficult.” People want to do what they want to do. There was one individual who came in and thought like, “I’m going to be the guy that wrangles her, beat his chest.” To make a long story short, I quit the show and never went back. It does play in. That guy got fired from the network years later, but it’s tough. I did try, but a lot of things happened that shouldn’t have happened because he was like, “I’m going to do whatever I want to do.” It was also the demise of the show as well. Not just my involvement.

That’s interesting because what it shows is that we can walk into a negotiation or a situation with a new relationship, and our preconceived notions can be the undoing of a long-term relationship. Oftentimes, when we go into negotiation, people don’t think about that. They don’t think about what those long-term implications are going to be. They make decisions based on a short-term outcome. As a result, they end up losing in the negotiation over time, even if they feel like they won at the moment.

If I stopped and thought about all of the different instances that what you’re talking about has come into play. I’m sure it’s far more than just that one incident. It’s the battle war conversation then. They may have won the battle, but this will cost you the war.

One of the other things that I talk about because I do a lot of public speaking. I love teaching people how to be a more effective negotiator in terms of business, as well as in their personal relationships. I often say that the hardest part of any negotiation that we have in between our ears. As a fitness trainer, you deal with people’s mindsets all the time. You are constantly encouraging and pushing people out of their comfort zone and you see things in people that they don’t see in themselves. As a negotiator, I see things in people that they don’t see in themselves and things in deals that people don’t see. From a negotiation perspective, how is the unbelievable, awesome career that you’ve had? I am impressed with your black belt. That blows my brain. How has your training as a fitness instructor moved you forward in your negotiation and because of the negotiation, what are some of the things you do when you end up having to negotiate with yourself that help you move yourself forward?

When I had actual personal training clients, or I would get the opportunity to work with people in that way one-on-one, which now is difficult. It’s not one session, it’s years of sessions working with someone, months of sessions, and my schedule doesn’t permit it. It’s things like apps and books. Back in the day, when I had that luxury, you would get to know the person. Here’s the science, and I know the science. It works for everybody. Eat less, move more, use common sense with your food choices. I was like, “This person feels deprived when you take this away.” How can we incorporate that but still maintain the same calorie allowance?

I’ll give up the fact that, “The food has to be perfect as long as we hit this many calories. I’ll work it in,” or then it’s like, “This person hates this fitness.” Even though it’s the most effective kind of fitness, they’re not going to show up for it, which means it’s going to be worthless. They’re like, “This and it isn’t as effective,” but if I can get it one more day a week, I can make it a little bit more impactful. Always playing with that science and working with their personality to get them to stick with it because even though I can tell you what will work the best and the fastest, if you psychologically can’t show up for it, it’s not going to work. I learned how to negotiate in that forum.

Personally, I constantly have to keep my eye on the prize when negotiating with myself or for myself. It’s very tempting to give in to the battle. You’d be like, “That’s it. The grounds are off.” I always am thinking to myself, “What is the long-term goal? What is it that you want long-term? If you do this, does it serve you to achieve that goal?” It might feel good to tell that person to shove it. It might feel good to dig your heels in now, and they’re not going to control you, but does that get you closer to that ultimate goal that’s at the top of this goal pyramid?

If the answer is no, I do my best to control my impulsivity. I have a series of behaviors. I engage in to calm down, I pause, I call a friend to talk myself through it or whatever it might be so that I can shift that part of my brain that goes from impulse, and emotional reaction to reason, being rational, and that’s how I personally manage it in my life. I don’t always win. I’ve made some mistakes, but I’ve come out on top more than not.

I should have a session with you. It’s constant too. It could be with my co-parent over the kids’ schedules. I don’t want them going back and forth week-to-week. I’m like, “I want them to go back.” Now that you say that, though, you’re right. It’s not about winning. It’s about trying to find a solution that works for everybody.

I’ve been married for many years. My husband is the most amazing person on the planet for me, probably not amazing for anyone else. The proverbial contract we entered into when we got married is not the same contract that we have now. We’ve changed, grown as individuals, and matured. Our kids are out of the house. We are in different financial positions, and we’re in different geography. Everything is different, and we’re not who we were when we entered that contract. In business, we often expect the business to stay the same, expect the same contract to continue to serve as a business that’s grown, changed, and morphed instead of renegotiating those relationships. How have you addressed the concept of renegotiation over the course of your career or in your company?

I could be a bit too lazy affair with money, but I also believe that I would rather have $0.50 than $0 of a dollar because I didn’t know what I was doing. It’s the pigs get fat hogs, get slaughtered. I don’t have the hog mentality. I could be a bit more strewed. My business partner started out as my licensing agent, then a manager, then a CEO, and then a business partner. We’re 50/50 partners. You look at what Oprah Winfrey did with Jeff Jacobs, who was the man that builds her business. She kept him on a relatively small percentage. It worked for her, and she’s very successful. No one can argue with it. For me, I was like, “I’d rather have 50% of what I know that he can build versus 100% of what I know that I can build.” That’s one example of how my business evolved. There were a variety of negotiations with this one person.

That renegotiation is something that I wish we would talk more about that notion that our relationships evolve and our business evolves with them. Thank you, Jillian. I have enjoyed our conversation very much. I appreciate all the things that you’re doing for women, for women entrepreneurs, and in business.

This is my absolute favorite interview. I learned so much. I’m like, “I need to go to this woman’s seminar. There’s so much for me to learn here.” I appreciate it. Thank you.

Jillian Michaels is the world’s leading fitness expert, renowned nutritionist and wellness entrepreneur. With an international community of followers exceeding 100 million, Jillian’s dominance in health and wellness extends to her award-winning Jillian Michaels: The Fitness App (awarded best of 2017 honors from both Apple and Google), successful fitness DVDs, top exercises streaming platform, 8 New York Times bestselling books, live speaking engagements, popular social media channels, a top podcast, and a list of key business partnerships and investments. In the past decade, her company, Empowered Media, has become a monumental wellness empire dedicated to total-life solutions comprising all aspects of living well, including nutrition, fitness, self-help and overall lifestyle. Her most recent book, The 6 Keys: Unlock Your Genetic Potential for Ageless Strength, Health, and Beauty, is available now.